About the Super Mario Medley video

A Senior in High School

In May 2004, Martin was a 17-year-old senior at the University High School in Irvine, California. In a few weeks he would graduate. He wanted to do something fun and memorable before he would start his classical piano performance studies at the Cleveland Institute of Music in the Fall. 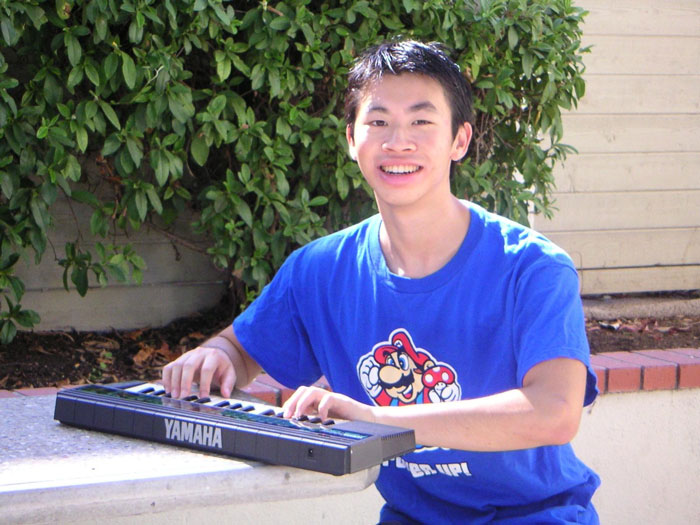 One day Martin was in a computer lab during his English class. Martin and his friends visited eBaum’s World, a popular college joke and humor site. After watching funny videos, Martin thought it would be cool if he could appear on the front page of eBaum’s World.

Martin had played in his high school talent show four times. One time he played blindfolded “A Whole New World” from Aladdin and Beethoven’s Piano Sonata in F Major, Op. 10 No. 2 – III. Presto. Martin thought that perhaps if he played Super Mario music on the piano blindfolded, he could appear on the main page of eBaum’s World!

Luigi was and is one of Martin’s friends. They both have the same last name but are unrelated. Also, they both were in the same math class taught by a teacher who taught Will Ferrell, a 1986 University High School alumnus.

For three weeks Martin practiced his arrangement of Super Mario music! Martin was able to overcome the difficult pianistic technical challenges in the music. In 2005 in the hallway of the practice rooms at the Cleveland Institute of Music, one of Martin’s pianist friends estimated that only about half of all the piano majors at the Cleveland Institute of Music could play Super Mario music due to the technical challenges.

Martin ran to Luigi’s apartment wearing a sleeveless white shirt and basketball shorts. With the help of Luigi as videographer, Martin played a 5-minute Super Mario Medley in one take. Luigi transferred the video to his computer, and Martin and Luigi submitted the video to eBaum’s World.

On Friday, July 2, 2004, Martin visited eBaum’s World in the morning on his home computer. Unexpectedly, Martin saw his video on the main page of eBaum’s World with a thumbnail caption, “Watch this guy play mario tunes on a piano. BLINDFOLDED!”! Martin had achieved his goal of appearing on eBaum’s World, and the video instantly became a viral video.

In the social media era, people would “like” and share a post. The number of “likes” and shares would correspond to the level of notoriety of the post. In the pre-YouTube era of 2004, countless number of forums and blogs discussed Martin’s 5-minute Super Mario Medley video.

About two weeks later Luigi recorded Martin playing 10 minutes worth of Super Mario pieces. John Jardine of the newly created Gprime.net agreed to host the video that had a relatively large filesize. Again, soon people mentioned the video in countless number of forums and blogs.

A few weeks later Martin graduated from University High School! Martin’s chapter in life as a high school student was complete. Little did he know that within 6 years of the Super Mario Medley video premiering on eBaum’s World, he would perform video game music in 15 countries. 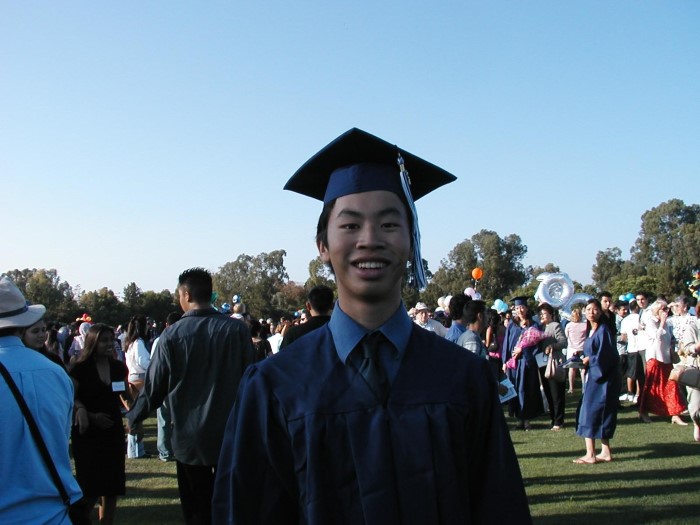 In August 2004, Martin, age 17, started his classical piano studies at the Cleveland Institute of Music (CIM). While completing his academic work and hearing the Cleveland Orchestra play at Severance Hall, Martin would also travel to perform video game music. Martin was able to balance all these activities. 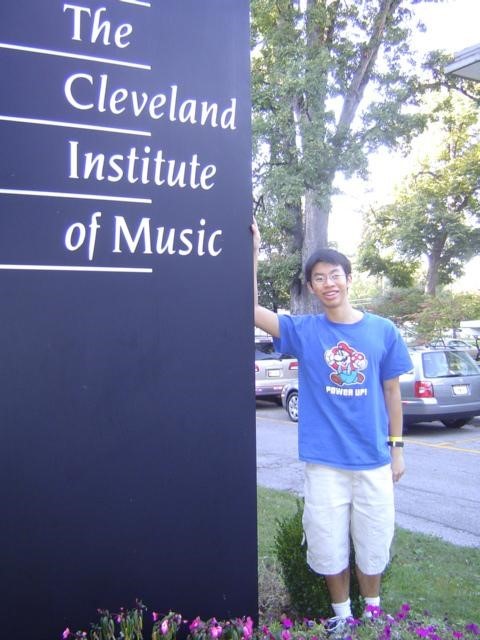 Transitioning From the Online World to the Offline World

In 2005, as an 18-year-old college student, Martin was inundated with emails, interview requests, performance invitations, and more due to the success of Super Mario Medley. In 2005 his video game music performances included, in March, performing at the San Francisco Walk of Game ceremony with Gavin Newsom in attendance and performing at the Game Audio Network Guild Awards at the Game Developers Conference, in May, performing at the BradyGames booth during the Electronic Entertainment Expo along with an MTV interview, on July 6, performing his piano and vocal arrangement of Final Fantasy VII – Sephiroth’s Theme with vocalists Cindy Shapiro and Laurie Robinson at the Hollywood Bowl in the inaugural Video Games Live show with 11,000 people in attendance, on August 26, performing a video game music and classical music recital at Penny Arcade Expo in Bellevue, Washington, on October 13, playing 21 encores after his first video game solo recital at the Alamo Drafthouse in Austin, Texas. Martin smoothly transitioned from the online world to the offline world.

In 2005, Martin’s classical music performances included, in January, performing solo recitals at Chapman University and for the Foothill Philharmonic Society, in February, winning second place in the Cleveland Institute of Music Darius Milhaud Society competition, in April, performing at Pianofest in Chagrin Falls, Ohio, performing at the American Liszt Society Festival at the University of Nebraska-Lincoln, performing at the Arts Orange County Awards at the Balboa Bay Club in Newport Beach, California, in June, performing a solo recital as part of the Keyboard Guest Artist series at the Cal State University, Long Beach, in July and August, attending Pianofest and performing in Pianofest concerts around the Hamptons in Long Island, New York, in October, performing at the CIM Ernst Bloch Society and performing for the Youngstown Music Teachers’ Association of Ohio, and in November, performing at the Country Club in Pepper Pike, Ohio. Essentially Martin was leading at least three lives including his online presence, being Video Game Pianist, and being a classical musician and student. Martin was also a California state junior chess champion, but for 9 years while Martin was in college and grad school, he did not play in any chess tournaments due to school responsibilities and performance opportunities. 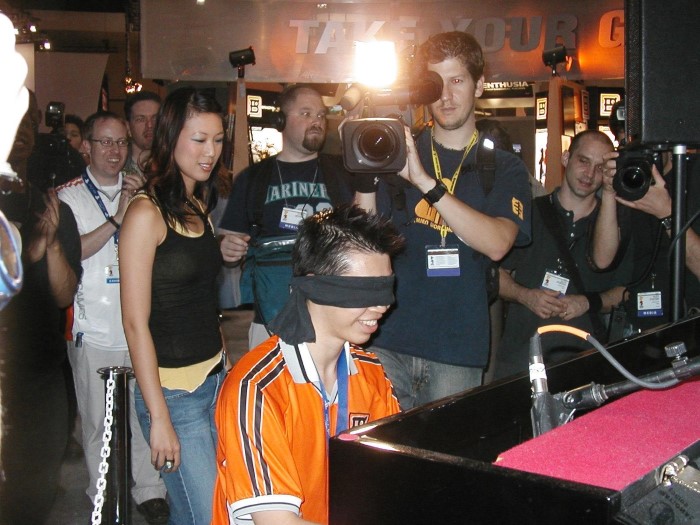 In November 2005, YouTube launched, and the advent of social media began. Soon about 70 people uploaded Super Mario Medley to their YouTube accounts, and the videos garnered approximately 10 million views total. On October 18, 2007, Martin was surprised to see how his Super Mario Medley video on his channel received many top YouTube honors:

In 2007, Koji Kondo received a Lifetime Achievement Award at the Game Audio Network Guild Awards in San Francisco. Martin gave a speech and performed Super Mario pieces for Koji Kondo and Shigeru Miyamoto. It was a dream come true for Martin to meet Shigeru Miyamoto and Koji Kondo, who respectively directed and composed music for many Super Mario games. 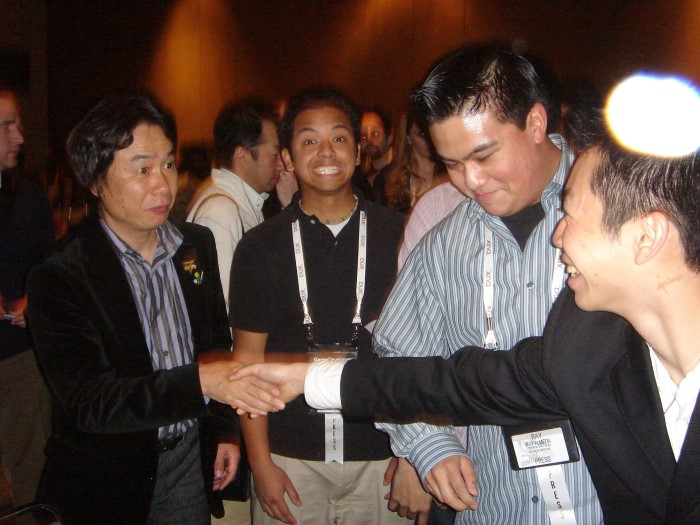 – Also in 2007 Martin and Koji Kondo while backstage at the Nob Hill Masonic Center in San Francisco for a Video Games Live show. –

What is Video Game Pianist™ Up to Today?

Video Game Pianist™ is just getting warmed up, and in July 2017, will be entering his teenage years.